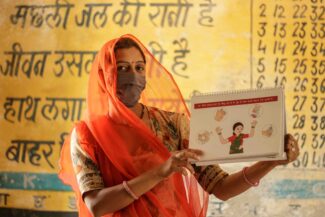 The Covid-19 pandemic has put immense pressure on the people and communities with whom Seva Mandir works in southern Rajasthan. During the first months of the lockdown, which began at the end of March in India, access to essential supplies and goods was greatly limited and all community services and events were suspended. Already existing challenges in this region were exacerbated, and the looming threat of economic decline left families wondering how they would survive the pandemic.

Many families with whom Seva Mandir works have at least one member who has migrated to distant towns or cities to find employment, usually as a labourer. With the imposition of the lockdown, these migrant labourers were left without work and thus no income to support themselves or remit to their families. As you may have seen in the news, one of the largest migrations since the Partition of 1947 began, with millions walking or, if lucky, travelling by vehicle the many hundreds of kilometres back home. In southern Rajasthan, thousands returned, mainly from Ahmedabad, Surat and Mumbai.

Once they had returned, families’ now reduced resources were put under extra pressure by having another mouth to feed. Women’s and children’s workload also increased, especially in activities such as collecting water. Fortunately, a bountiful monsoon in 2019 had filled the wells and anicuts (small dams) that Seva Mandir had repaired and built in the rural areas.

The third factor which affected how rural communities dealt with the virus was the lack of access to quick and accurate information. Modern communication methods are lacking and most people rely on community meetings and word of mouth to receive news – both of which were prohibited due to the lockdown.

It was clear from the outset of the lockdown that immediate support would be required to help the neediest families in southern Rajasthan. Seva Mandir began working with field staff and Village Institutions to identify those most in need, so that they could be provided with aid packages. Depending on their need, Seva Mandir supplied families with food kits (vegetables, spices, grains) to last a family of five two weeks and sanitation kits (soap and detergent) enough to last a family of five for four weeks. They also provided grain storage kits to farmers to increase food security. This early provision of emergency aid was particularly important in the early lockdown period, before public distribution systems were able to step in and before work was made available.

A comprehensive awareness campaign was launched simultaneously to ensure that families and communities had the most up-to-date and accurate official information about Covid-19 and how to protect against it. This was delivered via leaflets, WhatsApp messages, posters and through trucks fitted with loudspeakers. 200,000 awareness materials were printed and distributed across the region Seva Mandir operates in, most of them in the local dialect to make them more accessible.

Seva Mandir’s supporters, whether in India, the US or the UK, responded generously to appeals for help and we received a number of donations, both financial and in kind.

These efforts were vital in mitigating the effects of the lockdown and in providing families with essential goods and relevant information. Now, Seva Mandir’s focus has moved on to restoration.

Rural areas in southern Rajasthan have largely escaped the devastating spread of the virus seen in cities across India, but they will be affected by the long-term economic consequences of the crisis. Much of Seva Mandir’s work will now begin to focus on ensuring that individuals, families and communities have the ability and opportunity to improve and sustain their livelihoods.

As with all the organisation’s work, new methods are being created to work efficiently and effectively in the so-called ‘new normal’. Seva Mandir is fortunate to have extremely dedicated and motivated staff and supporters who are determined to ensure that the NGO can continue to transform lives and communities for the better, just as it has done for the last five decades.

You can read a full report of Seva Mandir’s initial relief efforts here.

As an organisation with significant international support, Seva Mandir has been a grateful recipient of funding from outside India for many decades. Supporters from all over the world have been instrumental in ensuring the implementation and success of projects and programmes which are changing the lives of people and communities in southern Rajasthan for the better.
As per government regulations, Seva Mandir has received foreign funding in line with the Foreign Contribution (Regulation) Act, which sets out how funds received from outside India can be utilised. This year, the government of India amended the FCRA rules.

One of the changes that has had a significant impact on Seva Mandir is the ending of sub-granting. One major donor had to end its support immediately and there could be others, resulting in a sudden cessation of much-needed activities supporting very poor communities, with no time allowed for a transition.

In this context, support given directly to the Friends of Seva Mandir and passed on to Seva Mandir is more critical than ever.

Donors can be confident that every penny given to Seva Mandir is put to the most efficient and effective use possible.

You can read more about the FCRA amendments here.

It is with great sadness that we mark the recent death of John MacAuslan.

John was a Trustee and Secretary of Friends of Seva Mandir from April 2012 to March 2020.

John had a fascinating and varied professional career, working early on at the Treasury, dealing with many issues including public spending, foreign currency, labour markets and corporate development. From 1994 to 2006, he was Director of Administration at the National Gallery. After this, he was a Civil Service Commissioner (2005-2010) and Company Secretary for War Child (2010-2015), the charity which protects children in war.

More recently, John was an independent scholar and, in 2016, Cambridge University Press published his book Schumann’s Music and E.T.A. Hoffmann’s Fiction in which he explores four great piano works by Schumann from the 1830s and their connections to Hoffmann’s fiction, as well as the aesthetic and intellectual context of early nineteenth-century German Romantic culture.

John first visited Seva Mandir while teaching in Rajasthan on his gap year in the early 1970s, and visited again in 2004 when his son, Ian, was a volunteer with the NGO. John became a friend of Seva Mandir from then on.

Not only did he and his wife, Karen, offer generous hospitality to visitors from Seva Mandir, he also gave advice and practical help, whether with speech writing or analysing an academic review of the NGO and sharing his insights with Seva Mandir staff, helping them to define the agenda for the years ahead.

Ajay Mehta, a former Chief Executive and President of Seva Mandir, says that John valued Seva Mandir’s patient approach based on the wisdom and commitment of ordinary people from the area. He appreciated the NGO’s Gandhian roots in trying to make village communities self-reliant and ethical.  ‘As a classical scholar, John related deeply to the founder’s dream of creating village republics, albeit in a small corner of Rajasthan.’

We will hugely miss John’s wise counsel and balanced judgements. For me as a new Trustee and later Chair – as I suspect for everyone – John was always a warm and knowledgeable source of guidance and advice, bringing to bear his long association and familiarity with Seva Mandir, together with immense experience and common sense. However, we should dispel any owl-like image which might be conjured up by the oracular insight, fund of knowledge and scholarly achievements. My abiding image of John is his almost boyish face and his perennially open engagement with all around him. Our deliberations will be the poorer without his humour and boundless curiosity.
At Seva Mandir, we owe a huge debt to John for his long and invaluable service which transcended, in both time and scope, his term of office and role. We were always close to his heart and he will always be close to ours.