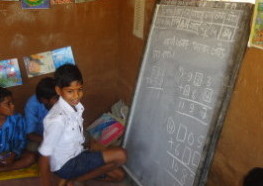 Gilly and Chris Wiscarson’s experience during their Spring 2014 visit to Udaipur.

Where to start. What to say. What to think. What to feel.

Seva Mandir’s refuge for battered wives hosted us for a morning. We sat with a group of twenty young women and their children. All the women had escaped from brutal husbands, and the newest arrival elected to tell her story. At first, calm and dignified; then suddenly, she became very distressed and started wailing in deepest grief. Her children, sitting on her lap, started screaming to see her so grievously upset. It emerged that her husband and father-in-law had been repeatedly beating her, and then her children: and had killed her baby daughter. The husband has four wives, as does his father, and she has had the courage to escape from him and come to the refuge. Thank goodness for the refuge.

As marble and soap stone mining companies around Udaipur change the ecological face of the area, water sources vanish, affecting villages and wildlife alike. As water becomes scarcer, animals come to the villages to graze on cultivated land, followed by predators in search of food. As if villagers did not have enough to cope with, panthers have emerged as a new deadly threat. Just recently, a nine-year old girl, sleeping at her doorless house, was snatched by a panther. The parents chased the panther, but it disappeared into the darkness. The poor lifeless child was found a kilometre away.

After the passing of the great Jagat Mehta in March, Jagat’s son, Ajay Mehta, Chairman of Seva Mandir, held a small reception at their family home in Udaipur. Kind and moving words were spoken about the great man. The thing about giants is that they leave giant footprints, and Seva Mandir is one of Jagat’s deepest.

How strange it was to be in Jagat’s home without Jagat, his presence felt even through his empty chair.

UNDER THE BANYAN TREE 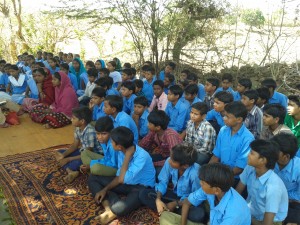 90 teenagers, all Seva Mandir alumni, muster under a banyan tree to talk about what education means to them. Because of their Seva Mandir education, they have been able to progress to Government-run senior schools. Shy but articulate, they say that they are the only members of their family who have had an education. While they are not always clear what it will lead to, they are clear that it will lead to something better

As with all progress, new problems appear. Here, it seems that the teaching of maths and science in their local Government school is inadequate. Teachers don’t turn up and, when they do, simply give out text books and leave the kids to self-study. There is no lack of willingness from the kids but frustration and self-doubt soon creep in because learning maths from a text book is like that isn’t it!

Priyanka Singh, Seva Mandir’s Chief Executive, voiced her dismay “we are teaching the children to go nowhere“. But that is so not true. Teaching kids to read and write and do their times tables may sometimes seem like planting a seed in a desert. But the rains do come, and, for these kids, opportunities will arise and then Seva Mandir’s teaching will blossom.

That is not hope over experience, but experience over experience. Priyanka’s next reaction was “why don’t we run residential programmes for senior kids to plug those maths and science gaps”. The teenagers loved the idea, judging on their show of hands. But how to resource it? Seva Mandir’s residential training centre exists but teachers have to be funded, food has to be purchased. How do you judge that return on investment!

And that is the gift of Seva Mandir. Let them judge, because there’s no way our western metric based society can or should judge.

THE FRUITS OF OUR LABOUR

Over 120km from Udaipur sits the county of Kotra. This is the place where the worst Government officers are sent as punishment. On the face of things, Kotra is different from many of the areas that Seva Mandir tends. Field after field suggests a productive agricultural foundation. Enough food to live on, certainly. Enough to prosper, sadly not.

How then to make the land a source of future prosperity. Seva Mandir has two answers. First, use human waste as manure and human urine as pesticide. Neither needing water. That’s about as green as it gets.

Second, grow stuff that grows best. One local farmer found he could grow bananas. With Seva Mandir’s help, he experimented with mangos, avocados, fern gooseberries, oranges and papaya. Fruit trees do not overnight grow. So for 8 years, the farmer continued to work outside of his village as a labourer while his wife carried water to the trees. Today the farmer’s land is an orchard. An abundant orchard, producing enough fruit to provide to many shopkeepers in the region. With their profits, the farmer and his wife have installed a pump from the nearby river.

Where one farmer thrives, many wish to follow. The immediate question is would competition wreck the margins. Quite the opposite, the farmers talk of forming a cooperative to take their produce further afield where they can command higher prices.

Another Seva Mandir miracle of sustainability.

MODI OR NOT TO BE

During April, over 800 million Indians vote in their General Election. The ruling Congress Party is likely to be replaced by the BJP led by Narendra Modi. This man is controversial to say the least, a charismatic force of nature who people either love or hate.