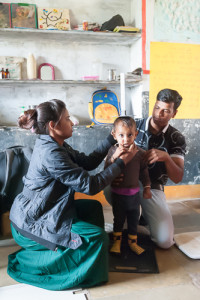 When a child is suspected of suffering from severe acute malnutrition (SAM), he or she is referred to one of Seva Mandir’s relatively new community malnutrition camps. A vehicle is sent to bring mother and child to the camp, to ensure their presence and also to avoid a mother having to walk a long way with a weak child. The trained nurses at the camp measure his or her height and weight and decide what category the child falls into.

At a recent camp, several of the children examined after referral from their day-care centre were found to be healthy, but a one-year-old boy, Ashwin, was found to be in the SAM category. The nurses examined him thoroughly and then produced a pack of RUTF (ready-to-eat therapeutic food) and asked the mother to give her son a tiny taste while he was observed to make sure he did not show any signs of an allergic reaction to any of the ingredients. Once the nurses were confident that it was safe for him to take the food, the mother was provided with enough RUTF for two weeks. His parents were asked to bring him back to the follow-up camp two weeks later, and a member of Seva Mandir field staff would visit the family in the meantime to make sure that the child was taking this life-saving food correctly.

Happily, there is a good outlook for most of the SAM children looked after by Seva Mandir’s field teams. Take Divyanshi, for example. When she was 7½ months old, she weighed only 4.5 kg and measured 60 cm in length. Like Ashwin, she was given a fortnight’s supply of RUTF and Seva Mandir’s team visited her at home and gave her parents advice, not just on feeding their daughter, but on hygiene and clean drinking water. After 3½ months of treatment and regular checks, Divyanshi had put on 2 kg and grown 6 cm. She still has some way to go, but she is on the right track. Her parents are very happy with the progress she is making.