With the help of Seva Mandir, Nirmala started a shop in her village and has found a new confidence 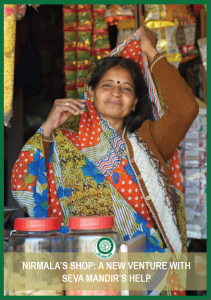 Nirmala is a housewife living in Shisvi village. There was no shop in Shisvi and Nirmala thought she would very much like to start one. But she had no money and her husband was reluctant to support her. What did she know about running a business? With Seva Mandir’s help and support, Nirmala applied for and received a small loan which enabled her to start a tiny shop. She did so well that she was soon able to repay the loan and secure a larger one to expand her business. The villagers thought it was a great idea and bought things from the shop. After a while, her husband seeing that money was coming into the household from the new venture, grudgingly accepted it, and began to help with the housework and stack the shelves in the small store.

Now Nirmala speaks out in village meetings and was even asked to present a prize at Women’s Day (having, somewhat to her amazement, won several herself). ‘I never thought that I would be able to speak in public, but the success of my shop has given me a confidence I never had before.’