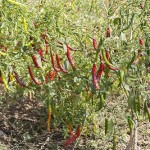 Dharma is a farmer from a remote village in Kotra block, one of the poorest and least developed areas in India. Farmers in the area have traditionally not been able to grow enough food for their family’s consumption, let alone have a surplus to sell. Green vegetables have not been part of the typical diet, which is based on cereals. The average annual income of a rural farmer is GBP 140.

In an effort to improve the food security and nutritional levels of the area, Seva Mandir set up a vegetable nursery in Dharma’s village, and he was one of 15 farmers who bought a number of plants to start a small-scale vegetable growing operation.

Dharma used to grow a few vegetables before Seva Mandir started this project, but he had to travel the long (and relatively expensive) distance to the neighbouring state of Gujarat to get the seeds. Now that they are available locally, he has been able to increase his production considerably. He finds that the plants reared locally are much healthier and more likely to survive than those brought from further afield, and if a plant dies it’s easy to go back to the nursery, something not possible if he has bought it in Gujarat.

Dharma has increased his family’s income by about INR 100-150 (GBP 1.40-2) a day in season from selling his surplus produce, and his family is eating many more vegetables than they did before.