Farewell to Shirley Williams, an ardent supporter of Seva Mandir and the Friends

Seva Mandir and the Friends of Seva Mandir mourn the passing of Shirley Williams (Baroness Williams of Crosby, 1930-2021), who was a friend and supporter of both organisations for many decades. She was for a while a Trustee of the UK Friends and in recent years a Vice-Patron.

Ajay Mehta, former Chief Executive and later President of Seva Mandir, writes: ‘Shirley first got to know my father [Jagat Singh Mehta, also Chief Executive of Seva Mandir] when he was posted to England as a diplomat (1955-6). She visited my parents when my father was posted to China from 1963 to 1965. My father was against the proliferation of nuclear weapons and this may have been one of many issues on which they agreed politically. Another topic on which they shared similar concerns was grassroots democracy. Shirley visited Udaipur in the mid 1980s at my father’s invitation to give a memorial lecture in memory of Bhai Sahib [Mohan Singh Mehta, Jagat’s father, the founder of Seva Mandir]. The lecture series was published as a wonderful book called The State in Crisis.’

‘My father Professor George Catlin was the Secretary of the British Indian Independence Committee way back in 1926 and through into the 1930s. Both he and my mother Vera Brittain were very closely connected with the Indian Independence movement. In fact my mother spent some days in the Ashram of Mahatma Gandhi. When I was a child of only three, Pandit Nehru, who was a student in London at the time, came to our house. I don’t suppose I realised when I first met him what a great man I had the pleasure of burbling at in my childish language. But to me and to my parents he seemed at the time an extremely promising student. I thought he was very handsome and I remember he gave me a small bangle from India. I remember like most little girls thinking that it was so nice to have a bangle, not recognising the greatness or future greatness of the man who had given it to me.

In 1942 my father came to India with the abortive Cripps Mission. It was an attempt to suddenly grant Dominion Status to India but India did not want Dominion Status, it wanted to be a free and totally independent member of the Commonwealth. As was so often the case with the British Empire, it was rather too little and rather too late. It might have been welcome forty years before. My father reported back to the Labour Party, which during the war was in the coalition government. He believed Dominion Status would not do, that nothing less than independence would be satisfactory to the great nationalist movement of India.’

Ajay continues, ‘Ever since the Friends of Seva Mandir (FSM) was started in the late 1980s by Sir Martin and Lady Mary Ewans, friends of my parents, Shirley was a supporter. During Chris Wiscarson’s tenure as chair of FSM UK, Shirley became a frequent speaker at events for donors. She would speak with passion about the good works of Seva Mandir, its profound impact on democracy and development. In her view, Seva Mandir was winning the battle against poverty.’

Shirley was always willing to take part in events organised by the Friends to highlight the work of Seva Mandir. She joined a panel alongside Ajay, Sir Mark Tully, Lord Dholakia and Lord Bilimoria to discuss the topic, ‘Shouldn’t India be taking care of its own poor?’ (You can read about this event here: https://www.sevamandirfriends.org/an-extraordinary-evening/)

Whether at public or more private events, Shirley was always happy to talk to supporters and potential donors about the work of Seva Mandir in Rajasthan. She was also happy to meet the successive Chief Executives of Seva Mandir when they visited London.

But she was just as willing to attend meetings of the Trustees of the Friends and offer practical advice and contacts. She was, for example, keen to explore how the Friends might establish a link with her old Oxford college, Somerville, (incidentally, also the alma mater of Indira Gandhi). Somerville hosts the Oxford India Centre for Sustainable Development (OICSD). Shirley introduced current Friends chair, Tony Bourne, and former chair, Chris Wiscarson, to the Principal of Somerville, Baroness Jan Royall, and initial discussions were held with the Principal and other college staff and also with the OICSD before the pandemic interrupted discussions. But we are now exploring how we might revive these initiatives, as it seems especially appropriate to do something jointly with Somerville to commemorate and honour Shirley. 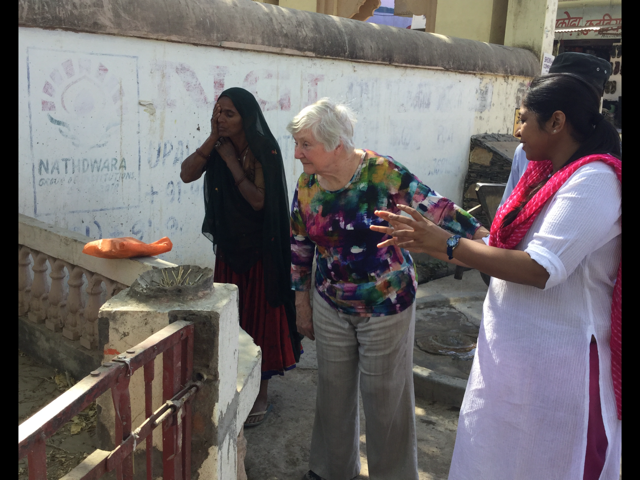 Shirley on a field trip to inspect Seva Mandir’s work

Ajay remembers: ‘Shirley visited Udaipur in 2010 and again twice in 2016. She would go on field trips with Seva Mandir to see the work taking place in the villages. By the time of her last two visits, she was getting old and tired easily, yet she refused no invitation to address Seva Mandir staff, go to the field or talk to students and faculty at Vidhya Bhawan [the educational institution also founded by Mohan Singh Mehta]. She participated in a panel on Indian democracy: here she listened. To the students of Vidya Bhawan she spoke of the need to know other cultures and histories. She had a vision which was international and centred on world peace. But what really grabbed her admiration was those who worked on the ground to build more just communities. It was perhaps this sensibility that made her such a great supporter of Seva Mandir.’ 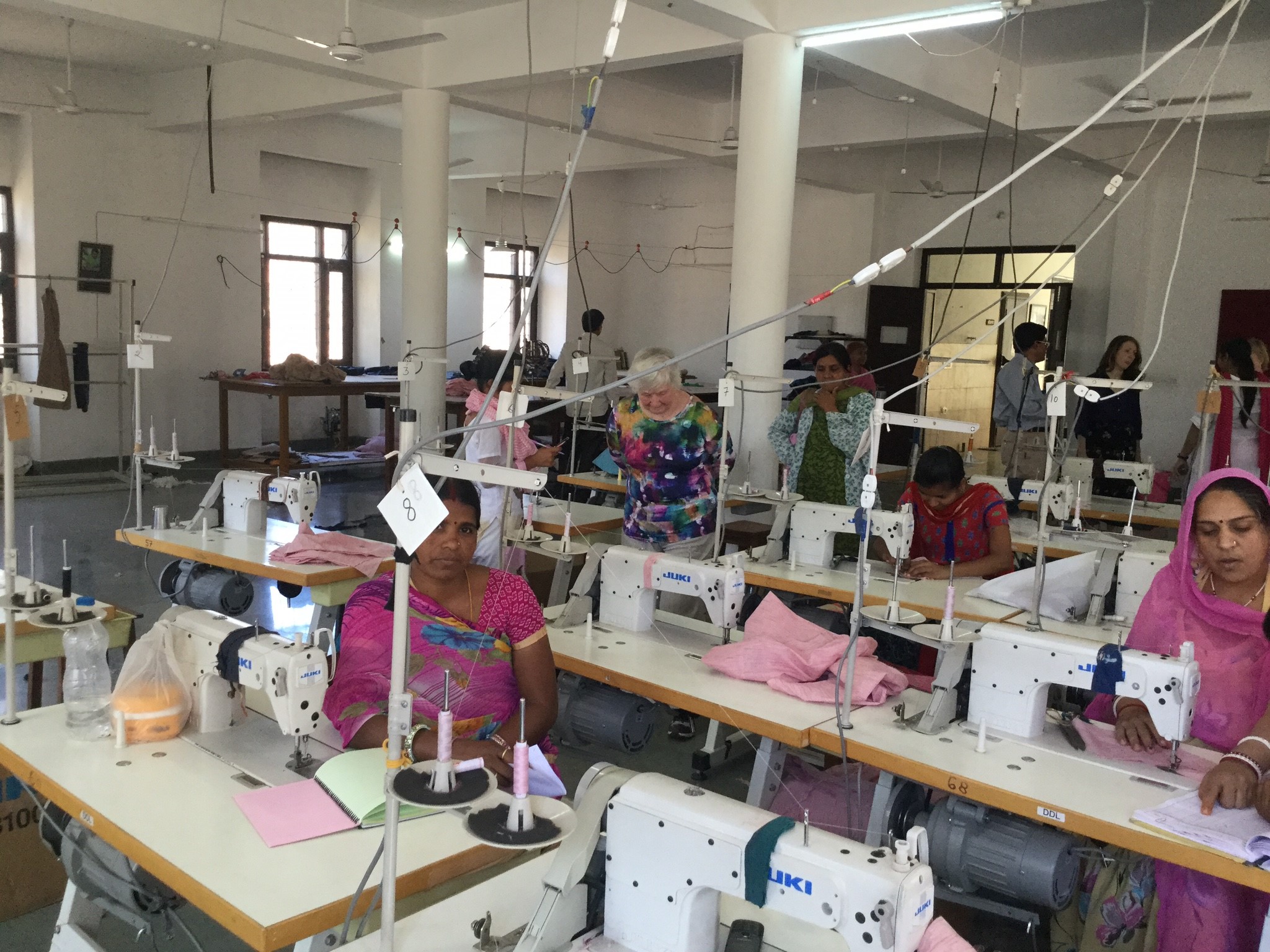 Shirley at Sadhna, a women’s sewing cooperative, which has its roots in Seva Mandir and is now a self-sufficient, small-scale unit producing hand-crafted products. It is owned by its artisan members.

Despite her international profile as a politician and intellectual, Shirley was a very warm and approachable person, as all who had the pleasure of meeting her soon discovered. Paul McNamara of Channel 4, who interviewed Shirley after an FSM event at which the Rt Hon Sajid Javid spoke, writes:

‘Shirley Williams looked me directly in the eye and her smile was mischievous. It was a Seva Mandir fundraiser, the interview fixed at the last minute when the organisers spotted the opportunity to put me and Shirley together. As the interview ended, it dawned on me that she’d ignored almost everything I’d asked and gave answers to the questions I should have put to her!

Lady Williams leaned towards me saying gently, ‘‘That was exceptional fun, wasn’t it?” patting my arm in a way that let me know she was always in charge, and reprised her (very mischievous) smile.

It was an extraordinary privilege to interview the formidable Shirley Williams.’ 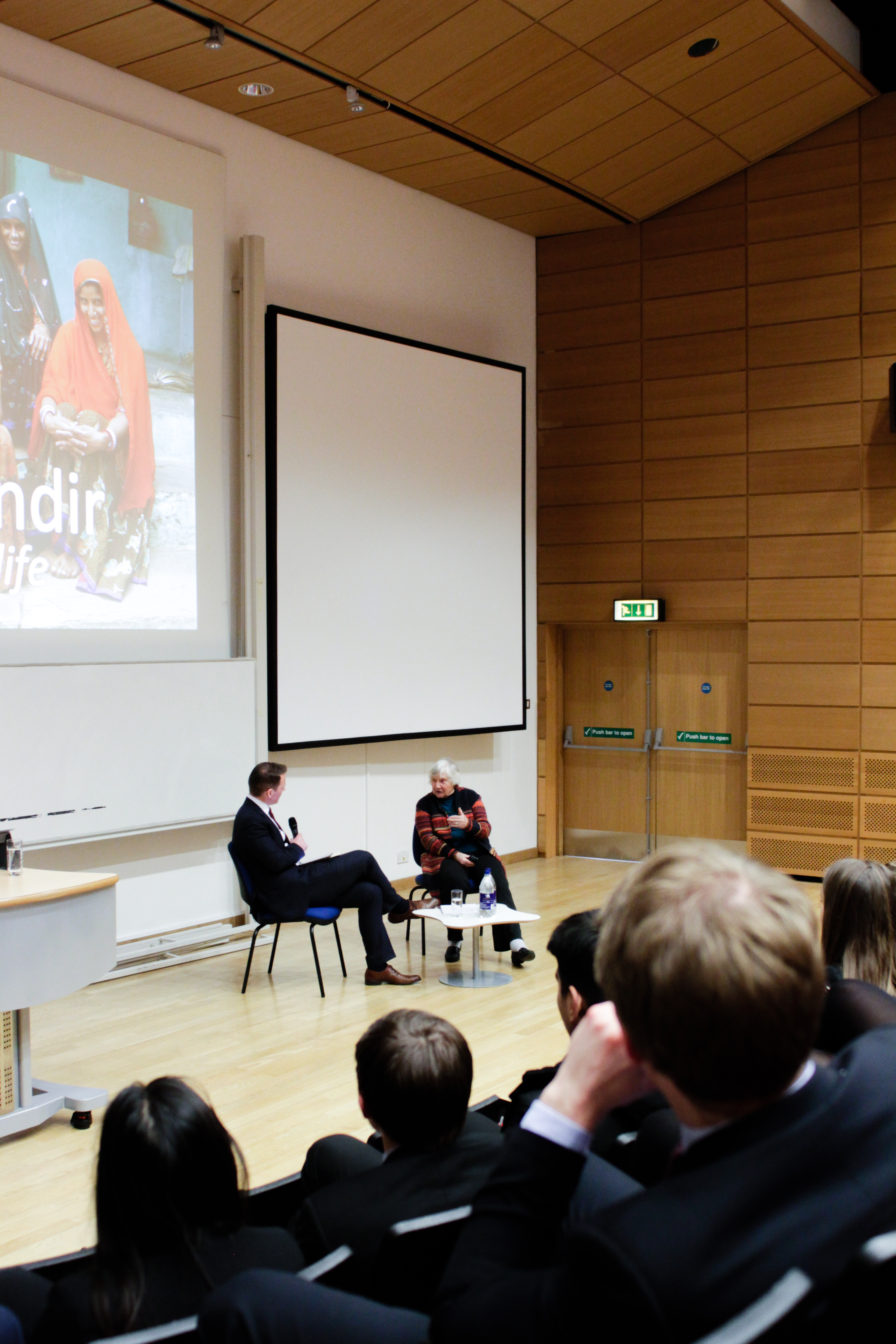 Chris Wiscarson, former Chair of the Friends, recalls one of Shirley’s visits to Udaipur in 2016:

‘Shirley was due to meet the Rajasthani press corps at 11 am in Seva Mandir’s office, a short drive away from where she was staying. I arrived there as agreed at 10.30 am. No sign of Shirley! Not unusual, so I waited for 15 minutes and then telephoned.  Her PA picked up and said that they were running late, and there was something in her voice which suggested that all was not going to plan.  She would not reveal what. Shirley appeared half an hour later looking as though she had just come from the hairdressers.  As soon as she saw me, she said looking very serious, “It’s all your fault, Chris.” I had no idea what she meant.  All was revealed in the car when she said that she had had a massage that morning, and the treatment extended to an Indian head massage, complete with oil.  As Shirley tells the story, she decided it was impossible for her to meet the press looking like that so she needed to shampoo thoroughly before venturing out.  “Chris,” she asserted with that huge winning smile of hers, “if you had seen me with the oil in my hair, you would have been straight on to The Mail”.

As it turned out, the press appeared an hour late so we were early. As ever, Shirley played a blinder.

On the final day of her visit to Udaipur, Seva Mandir laid on a tree-planting in her honour.  The watering can was too heavy for Shirley to lift by herself so I doused the young mango tree while the photographers did their business. I was looking down to make sure I didn’t pour the water on Shirley’s shoes, while she smiled radiantly into the camera.  “Chris,” she said, “look at the camera,” cuffing me to get my attention. That hadn’t happened to me since I was seven years old!’ 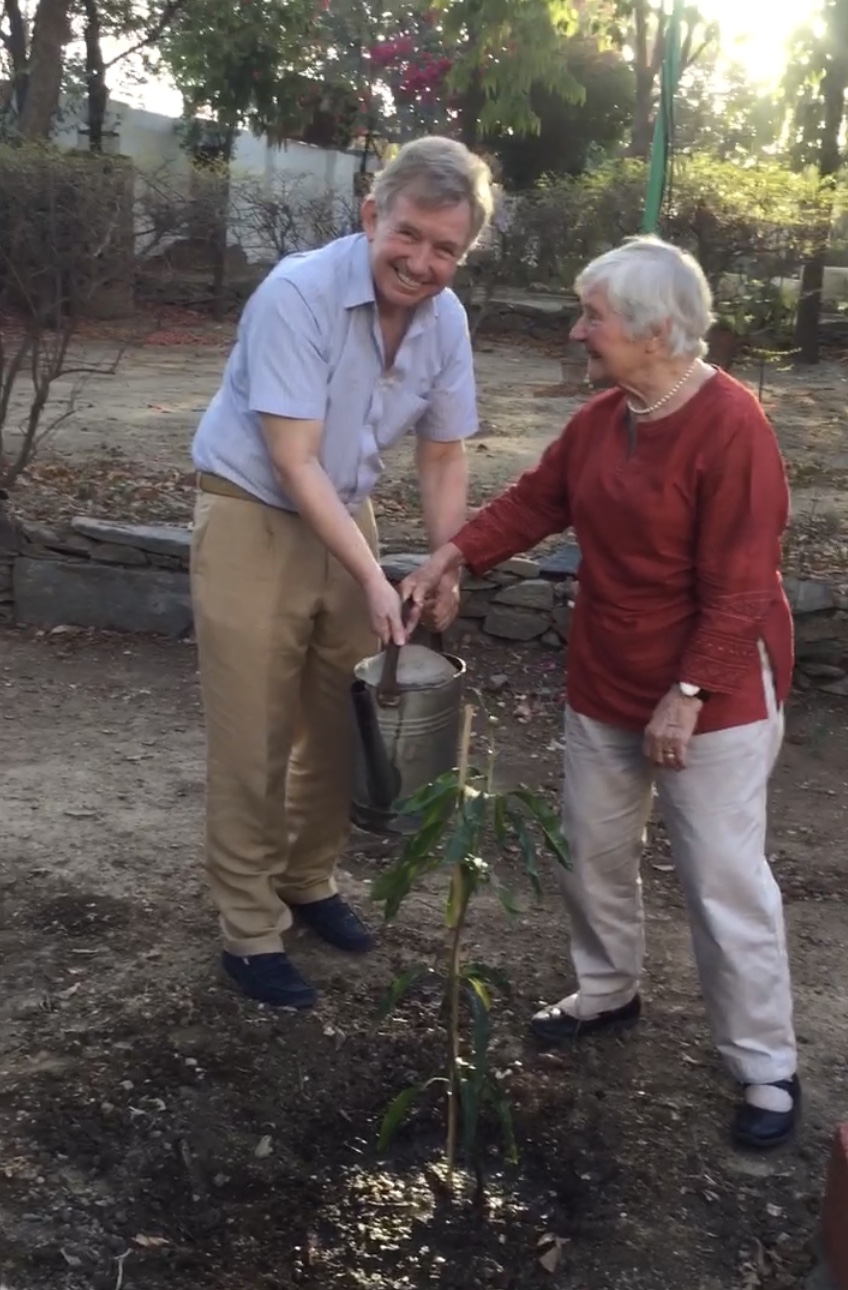 Shirley’s generosity to Seva Mandir and the Friends did not end with her death. At her funeral, her daughter chose the Friends as the charity to which Shirley’s friends could donate, should they wish to.

Shirley will be sadly missed as an inspiration and loyal supporter of both Seva Mandir and the UK Friends, and as a friend to many in both organisations.