May Newsletter – John and Felicia Pheasant

We recently spent two weeks with Seva Mandir.  Here’s what we experienced in our visit to Kotra, 150km from Udaipur, one of the remotest areas in which Seva Mandir works.

For most of the year, 85% of the land could not be cultivated, irrigation being essential in this semi-arid region. In an area where 90% of the population depends on agriculture to subsist, and where average monthly per capita income is less than Rs. 600 (less than £7.50), being unable to put so much of the land to use is crippling. 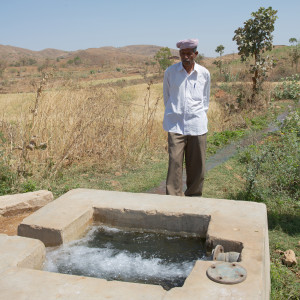 With Seva Mandir’s help, the local well was made deeper and a pump installed so water could reach the higher land.  In return, farmers give the well owner a quarter of their total production.  The well owner then pays for the fuel, contributes 50% of the remainder to the village fund, and uses the rest for maintenance of the well and the machinery. So now, villagers can farm all of their land, more than six times as much land as before.

We had briefly to cross into the neighbouring state of Gujarat and it was striking to see that every isolated house there is connected to the electricity grid thanks to the prosperity of this business-oriented state – very different from poor, rural Rajasthan, and certainly tribal Kotra.  Click here to read more

Farmers grow crops mostly for their own consumption. But lentils are one crop they can grow in sufficient quantity to sell the surplus. Being so far from the major towns, and with no access to transport, farmers used to have no option other than to sell to middlemen and receive a pittance for their lentils. With Seva Mandir’s help, one village has installed a mill which refines the dried lentils to produce dal, a staple of the Indian diet. One customer is the Taj Lake Palace Hotel in Udaipur.

The mill is run by men, but alongside the sacks of dal gathered a number of women, members of the local Women’s Resource Centre set up by Seva Mandir.  One woman was clearly a spokesperson for her group and, together with her colleagues from the Centre, she has been trained by Seva Mandir in family counselling. If a husband is accused of beating his wife, the couple is asked to come and meet this team of women to explain the situation. If they uphold the wife’s complaint, the man is asked to promise to mend his ways. Does it work? Quite often it does, as the shame of the whole village knowing what he has done makes him want to avoid future embarrassment.

We asked if they brought up their sons to treat women better than is often the case.  The women left us under no illusion that it would be a brave son who would mistreat a woman in the presence of these feisty mothers.

This tribal area has its own customs for dealing with crimes and disputes and tends not to involve the local police.  With Seva Mandir’s help, the team of women have learned about the police and the court system and are able to investigate suspected crimes. In one case recently, a second wife was found to have attempted to poison her husband and his first wife. The women’s team found her guilty and made her promise not to try again. Once more, the public shame has been enough to resolve the situation.

We asked one of the women what the greatest achievement of their team had been. ‘Before, no one knew who I was when I walked down the street with my veil over my face. Now they know I’m a force to be reckoned with.’  Click here to read more

Time for the loo

In Kotra, houses have no running water, no sanitation and no drainage.  Toilet facilities are non-existent, and fields are used.  Women and girls are particularly vulnerable to assault at these times. One solution is Ecosan toilets that Seva Mandir is helping to install.

Imagine two Indian-style floor-level loos side by side. The system requires liquid and solid waste to be kept separate: the liquid is filtered and then used in the fields; the section for solid waste is ‘flushed’ with ash, and the dry mixture is stored in a chamber below the toilet.

The first loo is used until the storage chamber is full, and then this is sealed and the second unit used. By the time the second chamber is full, the solid waste in the first has turned into odourless manure, which is taken out and spread on the fields and gardens, and the loo is once again ready for use.  Click here to read more