We recently spent two weeks with Seva Mandir.  Here are our reflections.

The gift of learning 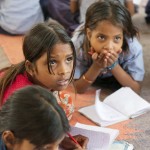 Perhaps the most inspiring visit we made was to Seva Mandir’s Learning Camp on the outskirts of Udaipur. There, 100 children between 6 and 14 attend a residential school for two months uninterrupted, three times in one year.  These are children who have either dropped out of, or never attended school.  In poor rural households, parents often decide that it makes much more sense for a child to work in the fields, or to migrate to pick cotton in Gujarat, than to spend time at school.

In classes of 10, with kind, caring, gentle teachers, these children soak up education. They are taught basic Hindi (generally not their first language) and maths.  Outside the six hours of lessons six days a week, the children enjoy games and cultural activities, and learn some English, a bit of science, and health and hygiene.  They sleep in the classrooms at night with their teachers, girls on one side of the camp, boys on the other.  And, every Sunday, a doctor visits. 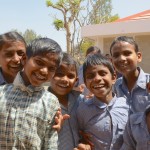 We were struck, as nowhere else in the world, by the children’s single-minded determination to make the most of every minute of their lessons, as if they were fully aware of how precious this opportunity was.  Yet, once the bell for lunch had rung, they were as boisterous and fun-loving as children anywhere. 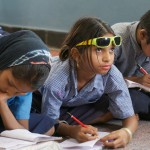 The camps are timed to avoid the busy periods of the agricultural year, so that parents are more easily persuaded to let their children attend. Seva Mandir used to be able to take 800 children spread across a number of camps every year.  Today, funds are now only available to take 100 a year.

The voice of women 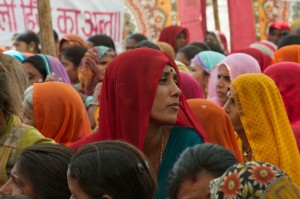 Another Seva Mandir miracle is to give women a voice in local communities.  We were privileged to attend one village’s Women’s Day celebrations.  In between the speeches and the prizes for women and girls who had distinguished themselves in one way or another, there was dancing and chanting, set against the backdrop of vibrantly coloured saris.  Schoolgirls read essays about what it was like to be a girl in rural Rajasthan.  A woman described the problems she had had on her husband’s death: in India, widows are expected to remain indoors and never remarry, and often become destitute as they are not allowed to work.  She expressed her gratitude for the support of the Seva Mandir-inspired women’s group both during her husband’s illness and afterwards, which allowed her to be more liberated, earn a living and play a part in village life. 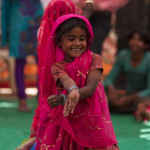 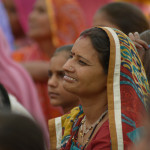 Another woman described the campaign she had waged against her local hospital at which certain staff, against all the rules, were charging for their services. The woman had tackled the doctors and nurses and, despite threats, taken her case all the way to the courts in Jaipur, where she had testified and won. She explained that without the help of Seva Mandir and the other women in the village, she would never have had the courage to do all this.

Delwara is a town of great contrasts – the houses of well-to-do Jain merchants, the mansions of Rajputs and, a stone’s throw away, the dirt-poor houses of the tribal people.  Delwara’s political institutions are not straightforward but, with Seva Mandir’s intervention, progress is being made. Wells are being made cleaner, with water being pumped to purification plants before it is used for drinking and washing.  Seva Mandir’s effectiveness was also evident in the form of several water tanks and hand-pumps and tens of toilets built particularly in the area of the town inhabited by the tribal people. 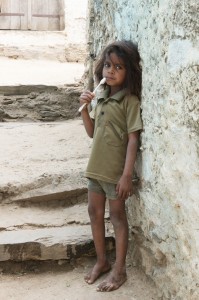 To shine light on the town, Seva Mandir has been training young people to conduct walking tours, designed to show visitors the architectural heritage and explain modern Delwara. The tour starts at the new headquarters of Sadhna, Seva Mandir’s sister organisation, which trains and provides work for women who make beautiful hand-stitched garments and furnishings.

It was heartening to see three young men, one Muslim, one Hindu, one Jain, working together to polish their tourist-facing skills and build their confidence as they get ready to showcase their town.