An Extraordinary Evening at Kings 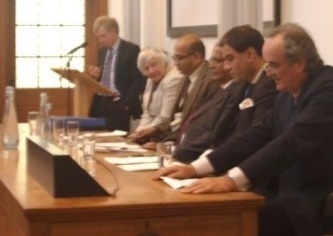 Over 200 guests filled the Old Anatomy Theatre at King’s College London to hear distinguished panellists (from left to right) Lord Bilimoria, Lord Dholakia, Ajay Mehta, Sir Mark Tully and Baroness Williams address this most difficult of questions Shouldn’t India be taking care of its own poor. The immense experience, understanding and intellect of the panellists was there for all to see. “Eclectic, fluent and insightful” said one guest. “Empathetic and charismatic” said another.

The huge audience was attentive, enquiring and engaged. The panel debate was facilitated by Friends of Seva Mandir in conjunction with the King’s India Institute. The welcome address was given by King’s College Principal, Sir Rick Trainor, who enthusiastically acknowledged the good doings of Seva Mandir. Past Chairman of the UK Friends, Praveen Moman, gave a moving memorial address on the late great Jagat Mehta who passed away in March.

And, finally, the answer to the question is: yes it should, but it shouldn’t have to do it alone.

That’s where the Friends of Seva Mandir come in. 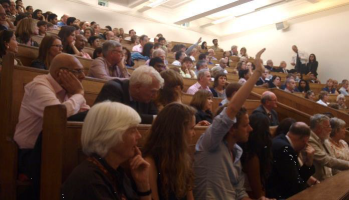 2 Responses to "An Extraordinary Evening at Kings"